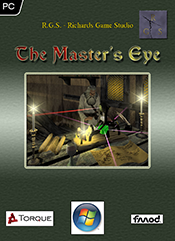 The Master's Eye is a first person, role-playing game in a fantasy and medieval setting and takes place in the lands of Ishkandragh. Your character (male or female) starts as a young peasant from a small hamlet high in the Smokey Mountains in the northwestern part and sets off on a journey to Ishkan, the capital city of Ishkandragh, to find his uncle. During this trip, he or she will meet nice people, ugly people and many more creatures. The reason for this journey is not immediately clear, but it seems to have something to do with a Magickal device called the Master's Eye, which was created aeons ago by the wizard Ishkan. Ishkan, later known as The Master and founder of Ishkandragh, had used this device when he sent a Daemon Lord back to the hell it came from, and defeated its summoner, Kragh the Necromancer.

€ 7.50 (VAT 21% € 1.25 included). Exchange Rates
Availability: Digital Download.
After your payment is completed, The Master's Eye is added to your product list and can be downloaded from the My Products section of your MyRGS account.

The playable demo of The Master's Eye contains the first 2 missions of the game. All the current game functionality (including all save and load options and the manual) is present in the demo, so you should get a good idea of how the game will look and feel. Also, if you are in doubt that your system meets the minimum requirements, just download the playable demo of The Master's Eye, and try. You can be sure that when the demo runs without problems, the payed version will as well.

Below you find screenshots from The Master's Eye. Click on an image to enlarge/shrink it. The button below the images will shrink all enlarged images with one click.

This is a gameplay video of the first mission of The Master's Eye.

More videos of The Master's Eye

More of The Master's Eye

Back to top of this page
Game Dev Links
Airship Dragoon